Streetcar passengers on the 501 Queen route have been getting rough ride lately, and it’s not going to end any time soon.

Shuttle buses have replaced streetcars on the 501 Queen route west of Roncesvalles Avenue on the Queensway and Lake Shore Boulevard West.

The Toronto Transit Commission said the service change began on Jan. 8 and is expected to last until the end of 2017.

TTC spokesperson Brad Ross said Monday the city will be doing bridge repairs on the Queensway and the TTC will use the closure to repair tracks and overhead wires.

Ross said buses will also bypass the Humber Loop while improvements are being made there.

“We are going to rebuild that … new track, upgrade the building, make the loop itself accessible for the new streetcar,” he said.

Ross acknowledged that streetcars were also diverted on Queen Street between Bathurst Street and Spadina Avenue from May until December for water main work.

“We do everything we can to minimize the disruption and the inconvenience but this is critical work that the city needs to do,” he said.

The following changes are in effect: 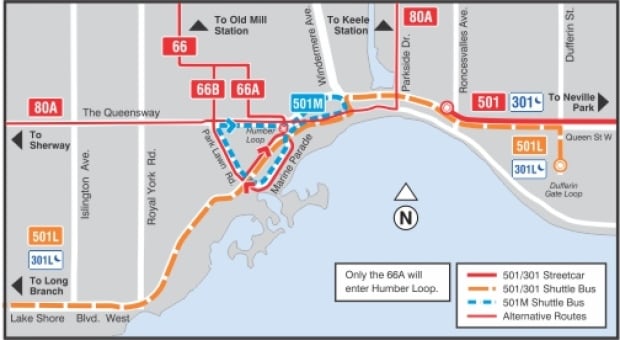 The TTC says the diversion will mean improvements along the 501 route, including equipping the Humber Loop for the new streetcars. (TTC)

The TTC says the diversion will mean improvements along the 501 route, including equipping the Humber Loop for the new streetcars. (TTC)

Customers can board streetcars between Dufferin Street and Roncesvalles Avenue.

The TTC said passengers using PRESTO, when transferring between buses and streetcars, should not tap onto the next vehicle when boarding.